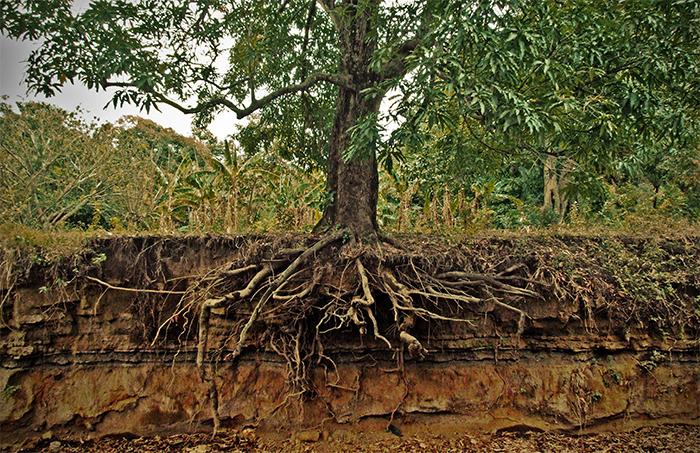 There is power and truth in what lies below the surface. The subterranean root system allows the mighty oak tree to stand tall and extend its branches skyward. Without this strong foundation, the trunk could not support the expanse of limbs, branches and ultimately the leaf system that in turn gathers the sunlight and fuels photosynthesis. But how often do we stop to consider the network of roots that make this all possible as we enjoy the beauty of the forest? By revealing the root structure, we can fully appreciate its vital role.

Just as the oak tree relies on structure that is hidden from view, North Carolina’s growth and prosperity has depended greatly on the contributions of countless men and women – many of whom have been hidden below the ‘surface’ of our states’ written history. There are numerous people of color and other under-represented groups who have played vital roles in the storied history of North Carolina. Sadly, the history books often overlook these hidden heros and sheros to focus primarily on entertainers and athletes. The North Carolina Freedom Park represents a fantastic opportunity to expand on North Carolina’s history and bring the hidden branches of the Freedom story to the surface.

The Freedom Park site has been in plain sight (so to speak) in the core of our state’s Capital for decades. Yet this horticultural gem has gone virtually unnoticed by most passersby. Our design proposal will dramatically change this dynamic by creating paths through the park that facilitate connections between several key destinations in town. These paths are excavated into the site, revealing architectural side-walls that hold back the earth and support the root balls of the legacy trees. These walls provide a textured surface where words and images telling the Freedom story can be displayed.

The diagonal paths also form edges for the three major components of the Freedom Park; the existing NC Victims Memorial, an area to Reflect, and an area to Gather. The Reflection component is oriented toward the State Legislature building and its message is closely related to the stories along the Memory paths. A grassy plateau forms the Gathering area which is suitable for small performances, poetry readings, and viewing films projected on the blank white wall of the Archives building.

In the center of the Park stands a vertical structure which extends from the lower path walls. This architectural element adds prominence to the composition and draws attention to the Park, welcoming pedestrians into this new Capital destination. 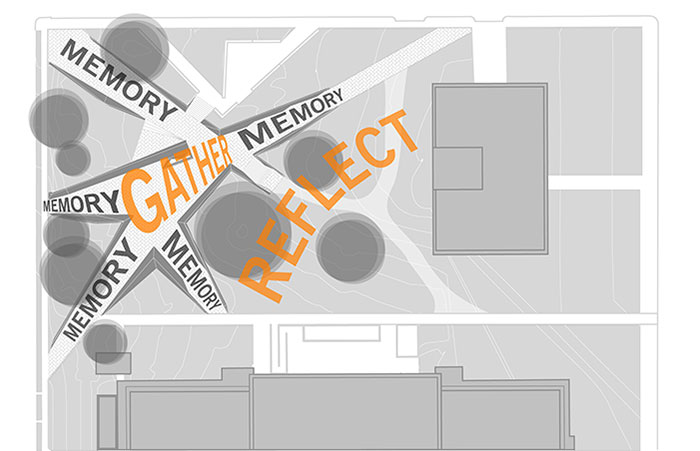 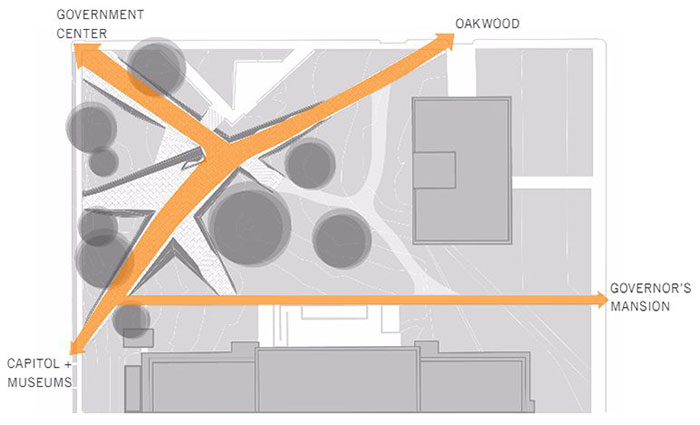 Facebook Twitter
Please check your e-mail for a link to activate your account.
Help Build the Park